Rosa Menkman's work is beautiful in how it works with glitch and artifact images in her video work.

"Every technology possess its own inherent accidents. ЯOSΛ MEИKMΛN is a Dutch visualist who focuses on visual artifacts created by accidents in digital media. The visuals she makes are the result of glitches, compressions, feedback and other forms of noise. Although many people perceive these accidents as negative experiences, Rosa emphasizes their positive consequences."
Source of quote: http://aboutrosamenkman.blogspot.com/

"The video-images are constructed out of nothing but the image created by feedback (I turned a high-end camera on a screen that was showing, in real time, what I was filming, creating a feedback loop). Then I glitched the video by changing its format and subsequently exporting it into animated gifs. I (minimalistically) edited the video in Quicktime. Then I sent the file to Extraboy, who composed music for the video. The composing process started with a hand held world radio. Extraboy scanned through frequencies and experimented with holding the radio in different parts of the room while touching different objects. Eventually he got the radio to oscillate noise in the tempo that he perceived in the video. The added synthesizer sounds were played live to further build on the non-digital sound and rhythm. This was later contrasted with drums which were digitally synthesized and processed through effects with a very digital sound to them. Just like with the video, the digital and analogue media and aesthetics of sound are mixed into one coherent whole."
Source: http://vimeo.com/2321833

Rosa's website is a homage to her aesthetic - wow! (with audio too and flickering favicon) 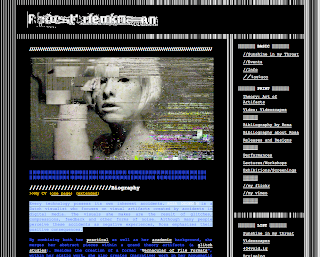