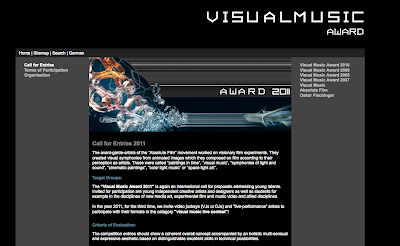 "The avant-garde-artists of the “Absolute Film” movement worked on visionary film experiments. They created visual symphonies from animated images which they composed on film according to their perception as artists. These were called “paintings in time”, ”visual music”, “symphonies of light and sound”, “cinematic paintings”, “color light music” or “space light art”.

The “Visual Music Award 2011” is again an international call for proposals addressing young talents. Invited for participation are young independent creative artists and designers as well as students for example in the disciplines of new media art, experimental film and music video and allied disciplines.

In the year 2011, for the third time, we invite video jockeys (VJs or DJs) and "live-performance" artists to participate with their formats in the catagory "visual music live contest"!"
More information: http://visualmusicaward.de/index.cfm?siteid=7
Posted by babold at 3:30 AM