"The CAMP Festival was founded in 1999 by Prof. Fried Dähn and Thomas Maos. Since 2003, it has been organized and run and coordinated by CAMP e.V. (Thomas Maos, Fried Dähn, Stefan Hartmaier, and Martin Mangold) .

The festival in Zagreb is a cooperation between CAMP e.V. Kirchentellinsfurt and KONTEJNER Zagreb, Croatia.
Concept 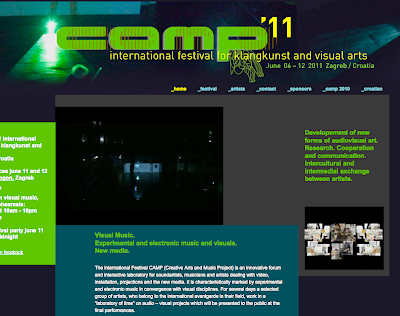 "The international Festival CAMP (Creative Arts and Music Project) is characteristically marked by experimental and electronic music in convergence with visual disciplines. For several days a selected group of artists, who belong to the international avantgarde in their field, work in a “laboratory of time” on audio – visual projects which will be presented to the public at the final performances."

"It is an innovative platform and interactive research lab for sound artists, musicians, and artists in the areas of video, installation, projection and new media. It focuses on new, experimental music in conjunction with light, projection and media art. In what is effectively a laboratory created for a defined period, artists – all of them recognized members of the international avant garde in their respective fields – collaborate for several days on new forms of audio-visual art, presentation techniques and live performances. The results are showcased to the public in concerts, installations, and performances held alongside the event. Moreover, various topics and aspects are presented and developed in accompanying lectures and workshops."