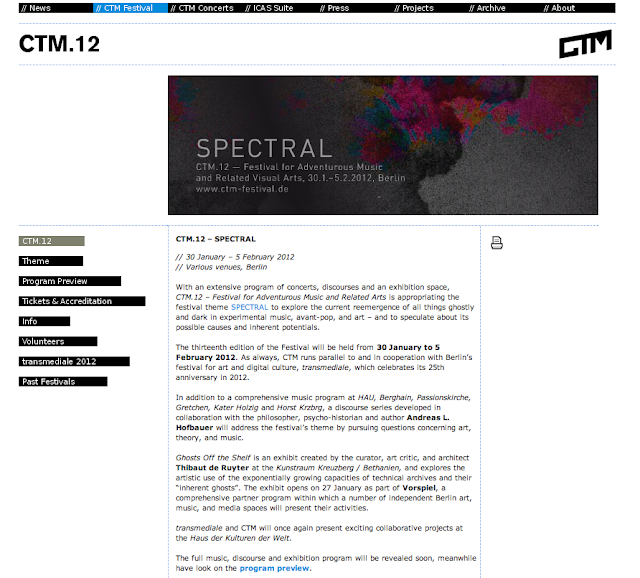 With an extensive program of concerts, discourses and an exhibition space, CTM.12 – Festival for Adventurous Music and Related Arts is appropriating the festival theme SPECTRAL to explore the current reemergence of all things ghostly and dark in experimental music, avant-pop, and art – and to speculate about its possible causes and inherent potentials.

The thirteenth edition of the Festival will be held from 30 January to 5 February 2012. As always, CTM runs parallel to and in cooperation with Berlin’s festival for art and digital culture, transmediale, which celebrates its 25th anniversary in 2012.

In addition to a comprehensive music program at HAU, Berghain, Passionskirche, Gretchen, Kater Holzig and Horst Krzbrg, a discourse series developed in collaboration with the philosopher, psycho-historian and author Andreas L. Hofbauer will address the festival’s theme by pursuing questions concerning art, theory, and music.

Ghosts Off the Shelf is an exhibit created by the curator, art critic, and architect Thibaut de Ruyter at the Kunstraum Kreuzberg / Bethanien, and explores the artistic use of the exponentially growing capacities of technical archives and their “inherent ghosts”. The exhibit opens on 27 January as part of Vorspiel, a comprehensive partner program within which a number of independent Berlin art, music, and media spaces will present their activities.

The full music, discourse and exhibition program will be revealed soon, meanwhile have look on the program preview."